Watching the Life Cycle of a Frog 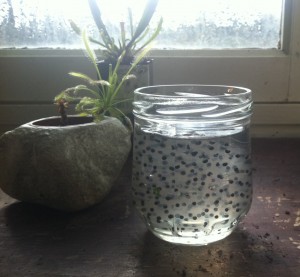 Brian writes: Yesterday, some friends of ours went for a long walk on a nature trail through a small wooded area here in Normandy. In the middle of these woods is a good-sized pond, and around this time every year the pond is filled with frog eggs – or frogspawn, as our friends call them. They had brought a glass jar with them to the park, and while they were at the pond they scooped up a big chunk of the frog egg mass, then brought it back to our house to surprise our kids with. Our kids were very excited! None of us has experienced watching the life cycle of a frog play out; from egg mass, to tadpole, to froglet (with the little tail), and finally to adult frog. I’ve included an image of the jar of frogspawn; click on the image to make it bigger – with the bright sunlight coming in through the window, the individual eggs in the jar are easy to pick out!

I’m no expert on raising tadpoles into frogs, but Bill, our friend who brought us the egg mass, told me that he used to gather frogspawn all the time when he was a kid growing up in Britain, so he told me what to do. Here’s what he said:

Step 1: Find a large glass container for the frogspawn

Currently the frog eggs are clumped together in a tiny mason jar; Bill told me to upend the jar into a larger glass container. Fortunately, we have an old fishbowl sitting atop the cupboards in our kitchen that will do the trick nicely.

Step 2: Put a big rock in the middle of the container

This is for when the tadpoles turn into frogs; they will need a rock or some other surface to climb out of the water onto.

Step 2: Empty the frogspawn into the container

At this point you upend the frogspawn into the glass container. Right now the egg mass is a gooey gel that takes up most of the mason jar! In the larger glass container they will have more room to grow and thrive.

Step 3: Add an inch or so of water to the bowl

This water should come from a stream or pond; it should not be tap water or include any added chemicals, like the fluoride commonly found in American tap water. This water will rest on top of the mass of frog eggs.

Step 4: Keep the frogspawn in a cool place

The frogspawn should not be heated or kept in a place that is overly warm; in their natural environment, at least here in northwest France, the frogspawn would be sitting in a pond with very low temperatures. We’re keeping our jar near a not-very-well-insulated window where they will remain nice and cool.

Step 5: Watch the frogspawn turn into tadpoles over time 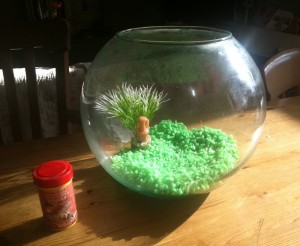 This will be the fun part. The eggs, that are now “periods”, will slowly turn into “commas”. At this point they will start to eat the mass of gel that is surrounding the individual frog eggs – this is the first nourishment that they will get as they start to grow into tadpoles. Then they will start swimming around in the bowl.

From what I’ve read, it should take about 12 weeks for a tadpole to turn into a miniature version of an adult frog, with only a teeny stub of a tail left to show that it was once a tadpole. As it is now the beginning of February, we should get to that point in early May.

This part I’m not so sure about. What sort of food do tadpoles and froglets eat? Perhaps fish food? I’m going to have to figure this out as the tadpoles start to grow!

Step 7: Release the tadpoles, froglets or frogs back into the wild

When it’s the right time, we’ll release the young frogs back into their natural environment. It’s important to find the perfect habitat for the young frogs – for example, there’s a flowing river right outside our house, but this is not the right environment for baby frogs; it will kill them! Instead, we will need to find a nice, calm pond for them to live in – perhaps the pond where Bill and his wife originally found them.

Bill mentioned that there is actually a very small chance that any of the tadpoles will turn into frogs. I find this quite amazing, because as you can see, there are a lot of eggs in that mason jar! I can only imagine how much harder it is for tadpoles to grow into frogs in the wild, where any number of hungry creatures is more than willing to turn them into a tasty snack.

So that’s the story of our jar of frog eggs. As time goes on and the eggs start to hatch, I will make another post with an update. It should be a fun thing to experience!