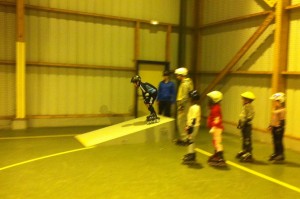 Since the beginning of the school year our children have been taking inline skating classes in town once a week after class. Originally I had thought that perhaps the kids would get into roller hockey; being Canadian I had some degree of hope for this! But at that point, the kids were not interested in learning how to play hockey… they simply wanted to learn how to skate.

Inline skating is often referred to as “Rollerblading” in the United States, Rollerblade being an early popular brand of inline skates where the wheels on the skate are lined up in a row rather than placed two to a side like on the classic roller skates from the 70s. Here in France where we live they refer to inline skating as “Roller”, or “Roller Club”. A lot of kids start out in Roller Club and then progress to the local roller hockey league… there are several teams in town that compete with teams from neighboring areas.

While the kids have been participating in Roller Club I’ve noticed that there are a few benefits of inline skating. Here are three of the big ones I’ve discovered:

If you’re going to play ice hockey, you’re going to need a lot of equipment… skates, pads, helmets, pucks, nets, and warm clothing are the ones you might immediately think of, but the most important piece of equipment you need to play ice hockey is an ice rink. These are not always easy to come by, and they certainly aren’t anywhere to be found where we live in France. To play roller hockey all you need is a gymnasium or a safe parking lot, and there are plenty of those around. And if you’re just interested in doing some skating, there’s very little setup required… just lace on some skates, put on your protective gear, and off you go.

I have fond memories of pick-up games of street hockey growing up… we’d set up nets on the road and play with sticks and tennis balls in our running shoes, always ready to move the nets out of the road should somebody shout “car!” to signify the approach of an oncoming vehicle. This was a lot of fun, but the “skating” part has always been an essential part of hockey, and inline skates give kids this ability! And by the way this story is by no means advocating letting your own kids play in the middle of the road like I used to do!

Inline skating helps children learn balance. At first they’re going to wobble all over the place, and there will probably be a few good spills on the way to becoming a proper inline skater… be ready for some sore rumps! But eventually they’ll be whizzing around on their inline skates, and their sense of balance will be the better for it.

3. Inline skating can be competitive, cooperative, or both

What was surprising to me about Roller Club here in France was the amazing variety of games that the kids are able to play on their skates. The games that they play are a lot of fun, and they all help the kids practice certain motor skills. Games can be competitive, cooperative, or a combination of the two to suit the tastes of almost any child. Some of the games children can play on inline skates include:

Our kids certainly seem to enjoy Roller Club and inline skating; I’ve already seen some remarkable improvement in their speed and agility during their weekly skating sessions. I’m looking forward to seeing how far they choose to take it!