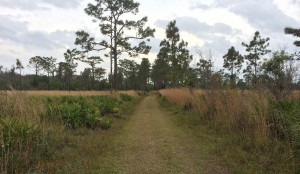 Did you know that the Walt Disney Company owns a 11,500 acre wilderness preserve in the middle of Florida?

Neither did I, until I visited the site with the family this weekend. The Disney Wilderness Preserve is a massive chunk of land near Poinciana, Florida, south of Orlando and the Disney theme parks.

In 1991, The Walt Disney Company planned to develop land that would impact an estimated 4,560 acres of existing wetlands. As part of The Clean Water Act, designed to protect America’s diminishing wetlands, Disney was required to either avoid, minimize, or mitigate this loss. In order to comply with The Clean Water Act, The Walt Disney Company purchased 8,500 acres of working ranch land being considered for home and golf course development and, coupled with an additional 3,000 acres of land purchased by the Greater Orlando Aviation Authority, worked with The Nature Conservancy to restore the land to healthy wetlands and forests. 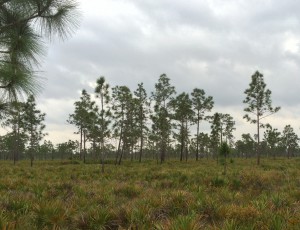 Instead of doing what companies often do when complying with the Clean Water Act, creating small pockets of restored land with minimal positive impact to plant and animal communities, Disney decided to do it right with the planning and development of the Disney Wilderness Preserve. This was the first project in Florida to take on a long-term, large-scale comprehensive wetland mitigation endeavor. The land purchased by The Walt Disney Company had been heavily logged, ditched, and grazed since the 1940s when it had been used as a ranch. The Nature Conservancy restored the land to its original state by redirecting natural water flows disrupted by drainage and introducing a prescribed fire program for the area.

The area now hosts more than 1,000 native plant and animal species including the bald eagle, Florida scrub-jay, gopher tortoise, longleaf pine, and scrub oak. Two Florida panthers, members of one of Florida’s most endangered species, have also returned to the area on their own to live and thrive. 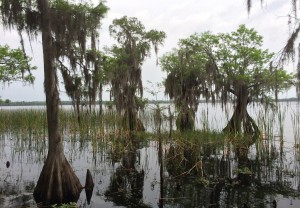 Our family visited the Disney Wilderness Preserve early Saturday afternoon. The sky was starting to darken, and the winds were picking up – a sure sign of a storm to come. But we had traveled all the way south of Poinciana to visit the Preserve, so we at least wanted to walk inside a little ways! We ate a quick picnic near the Conservation Learning Center, a combination administrative hub and museum at the start of the walking trail, then headed out on foot.

We hiked along the trail to Lake Russell, one of the last remaining pristine lakes in central Florida. At Lake Russell there were some stately cypress trees with their “cypress knees” poking out from the shallow water of the lakeshore. At this point we started to hear the low rumblings of thunder. I should mention that if you’re going to get caught out in a thunderstorm, one of the places you might not want to be caught is in the middle of a low pine savannah! We weren’t sure if the storm was going to blow by us or come at us, but it’s always a good idea to err on the side of caution when it comes to playing with electrical storms. So instead of hiking the rest of the two-mile trail we opted to head back and take a shortcut that would lead us back to the Conservation Learning Center and the parking lot. 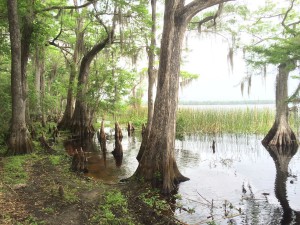 Just as we were about to reach the Conservation Learning Center, we saw streaks of lightning in the sky, and droplets of water began to fall. Great timing! We had passed one more fellow out on the trail carrying a large expensive camera; we hope he made it back before the rains came in earnest. We signed out and made for our car. We stopped in at a nearby Home Depot on the way home, and that’s when the deluge started! At one point, the winds were pushing through the mesh siding of Home Depot’s garden center, sending clay pots of orchids crashing to the floor and employees scurrying about in a panic. Apparently there had been a tornado warning for our area. The amazing power of the storm was really something to see! And I, for one, was glad to be seeing it in Home Depot and not in the middle of the pine savannah.

So that is my summary of our (shorter than we might have liked) visit to the Disney Wilderness Preserve. If you’re in the area, I highly recommend you pay the site a visit – preferably on a clear day! It’s an amazing and beautiful place, and a terrific example of wetlands restoration.