Tens and Ones Digits with Mia the Math Magician 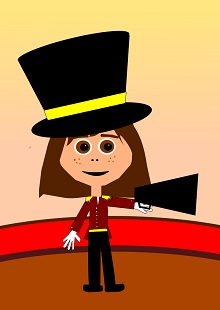 Mia the Math Magician has a special skill – she is a wizard with mathematics!

Here are two free circus-themed worksheets to use with your students or children to teach them that two-digit numbers are composed of a tens digit and a ones digit with the help of Mia the Math Magician. Today Mia is working as the ringmaster of a Big Top Circus.

These worksheets include two different activities that you can use to demonstrate the concept of number place value: that units in different locations in the number have different values within the number itself. Specifically, these worksheets work with the tens digit and the ones digit in a two-digit number. In certain cases students will be presented with a single digit number, in which case there will be no tens digit indicated.

An introduction to place value

The first worksheet introduces the concept of tens and ones. If you’re completing these activities in a classroom or homeschool setting, take the time to explain the first example to your students, perhaps using a chalkboard and a whiteboard to draw the units and then to circle the objects that correspond to the tens digit in the number with chalk. Then have the students in the class complete the remainder of the problem sheet on their own. Help them if they need extra assistance in understanding the concept.

How many tens and ones?

The second worksheet is full of problems for which students are given two-digit numbers and must indicate which digit is the tens digit and which is the ones digit.

This lesson falls under standard 1.NBT.2, Number and Operations in Base 10, for first grade common core mathematics skills:

Understand that the two digits of a two-digit number represent amounts of tens and ones. Understand the following as special cases: 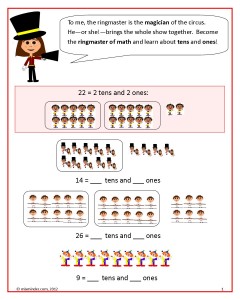