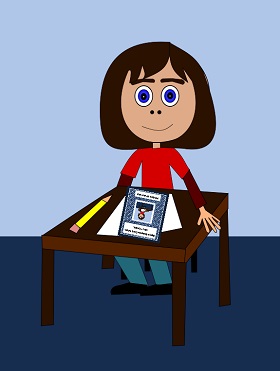 Here is the Common Core at a glance for the sixth grade. I’m hoping that teachers will be able to use these graphics as posters for their classroom walls to remind them of the Common Core domains that they will be teaching throughout the academic year, and that parents of students who are studying according to the Common Core State Standards Initiative will be able to glance at this pie chart to understand generally what sorts of Common Core math skills their children will be learning. The infographic is available as a free downloadable PDF document that can be found at the bottom of this post.

You will notice that the colors I’ve used in the pie chart for sixth grade are, for the most part, different from those colors I’ve used in my previous charts. This is because in the world of the Common Core, the sixth grade is where things start to get “shaken up a little”. While I’ve been indicating generally the same Common Core domains from kindergarten through to fifth grade (Operations and Algebraic Thinking, Number and Operations in Base Ten, Geometry, etc.) in sixth grade nearly the whole set of Common Core domains changes; only Geometry remains (Geometry remains a Common Core domain all the way through the eighth grade, and then has its own special section during high school, where the Common Core standards are laid out differently from those in elementary school).

During the sixth grade, students will be learning, practicing, and reviewing the following CCSS skills:

The Common Core State Standard domains for sixth grade mathematics are broken down in the following percentages:

Beneath each of the domain names you will find what Common Core skills students will be approaching as they work their way through the sixth grade.Visit learn academy for more information.

Thanks for reading, and please let me know if there are any other interesting charts or infographics you’d like to see about elementary school teaching or the Common Core – I’d be more than happy to create them. 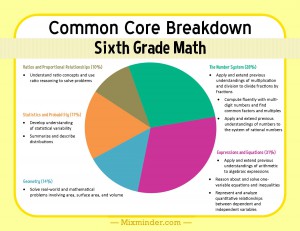