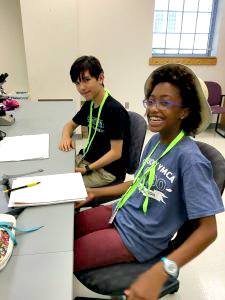 This summer, our son, a rising eighth grader, went to Davidson College in Davidson, North Carolina for a Duke TIP Center for Summer Studies program. In order to qualify for this intensive three-week program he had to attain a certain score on the SAT test – which he did. As he is a big fan of science, he decided to take a course called DNA: Unlocking the Genetic Code.

The Duke TIP Center for Summer Studies (and the less rigorous but still plenty rigorous Duke TIP Academy for Summer Studies) are not cheap programs (though they do offer some scholarships). They also require some coordination – getting your kid to Davidson, or Duke, or Georgia Tech, or wherever the program is taking place can be a difficult proposition. However, if you are able to get your child to a Duke TIP program, here are some of the reasons you might consider doing so:

1. Students will meet other gifted and talented students

When you’re a gifted and talented student, you are a member of a very small group of kids. Most of the kids at your school will likely not also be gifted and talented; as such, you might find it difficult to make friends who have the same interests. By going to Duke TIP, you will meet a lot of other kids who are into similar things as you. Many students who attend Duke TIP feel that they have found “their people”. Our son was surprised (but maybe not so surprised) to learn that about half of the kids he met at Duke TIP knew how to solve the Rubik’s Cube.

When I saw the first photo of our son at Davidson College, I heaved a sigh of relief. “He’s wearing different clothes than we sent him in,” I said. “At least he’s changing his clothes”.

These days, students do not have the independence that kids once had. Where children once biked to the park after school to play with their friends outside, more and more kids these days are staying home, playing video games, chatting online, and generally playing it safe – at least, safer than kids did back in the 70s or 80s. Going to Duke TIP gives your child a controlled, supervised environment where you are nowhere nearby. And they have to survive without you or your guidance for three weeks.

Our son did change his clothes, took showers without being told, chose healthy food to eat in the cafeteria, and generally lived independently for three weeks.

I wasn’t sure what to expect from our son’s DNA program at Duke TIP. However, when he came home, I looked through the notes he took and the handouts he was given during the course. I was amazed. This was some serious stuff! The program went in-depth into the science of DNA, genetics and genes, diseases, and other interesting and complicated material.

When you’re in a class full of gifted and talented students, most students will be able to keep up with rigorous coursework – and enjoy doing so. Teachers and instructors can feel free to pile on the more complicated subjects. And they do.

4. Students are taught without testing

Here’s something that I thought was a positive thing. At Duke TIP, there were no tests, no final exams. Students were not given letter grades. There was no homework after class, so students could participate in the various extracurricular activities (sports, games, dances, and so on) that were offered by the program.

Instead, students were assessed based on their work in the classroom and their cooperation with other students. The lack of testing meant that kids were able to concentrate on learning.

Even better, students were taught according to what the instructor thought was interesting and important. They were not taught with the end goal of taking a test. All too often, courses are structured around making sure students will pass the end of year examination and not that students will learn. I personally feel this is not an effective way to educate children.

5. Students get a taste of life in college

For three weeks, our son lived in a college dorm at Davidson College. He had to deal with the old buildings and the crummy air conditioning. He had to take showers in the public bathrooms. It wasn’t a luxury hotel, to be sure – but it gave him a taste of what it will be like when he finally does go away to college after he has completed high school.

Our son came back from Duke TIP knowing more about what he wanted to take in college, and where he wanted to go (it turns out he wants to go “to a small school – like MIT”). Also, thanks to a teaching assistant who had been through the process of applying for and getting into colleges, he knows more about how he can get himself there. He left his Duke TIP program energized and raring to go. And that’s a great way to be.

As a side note, our son’s TA, who gave our son lots of good information about getting into a good college, was a female science student who did very well in high school and achieved a near-perfect SAT score. Meanwhile, his main instructor was also a successful female scientist. They and the other TAs and instructors served as great role models for the kids.

I hope you have enjoyed learning more about some of the benefits of the Duke TIP Summer Studies programs. If you have any questions, be sure to leave them in the comments.