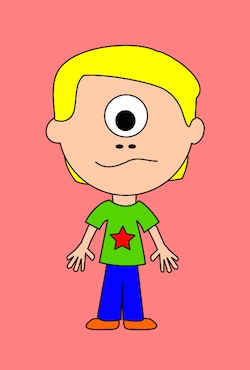 Brian writes: Late last week I participated in Career Day at our daughter’s school, presenting in front of my daughter’s fourth grade class. Instead of focusing on a single profession, I decided to share a variety of different aspects of my career through the years: the places I’ve lived, the schools and universities I’ve attended, the jobs I’ve had. This is because it seems to me that these kids will go through many changes throughout their careers. While they may start their careers as librarians or doctors or astronauts, they may switch partway through to become teachers or writers or botanists.

So I showed a map of the places I’ve been, pictures of the places I attended school, and outlined some of my career highlights, including computer programmer, web designer, project manager, and of course, creator of educational products. I described some of the opportunities I’ve seized simply because they presented themselves, and how taking advantage of such opportunities helped to further my own career. I showed them some examples of web design and computer programming (including some Minecraft code that I found via an image search – they liked seeing how games like Minecraft actually looked behind the scenes).

I was impressed by the questions these fourth graders asked, how well behaved they were, the curiosity they displayed, and the general positivity in the classroom. I showed them how we created educational products by actually doing some graphic art (with input from the students) and creating a Career Day worksheet right there on the board in front of them. It was a fun interactive experience and in the end we ended up with a fun Career Day worksheet that you can find here. The “cyclops kid” was their idea – when I asked what kind of eyes the boy we were making should have (thinking that they might say big, small, wide, or what have you), one of them said, “one eye!”… and the rest of the students agreed! They also got to choose the various fonts we used to create the activity.

I received a small stack of thank-you letters from the class the other day. I was touched that two of the kids said they wanted to be like me when they grew up – working with technology in a creative way. I sincerely hope these fourth graders (including our daughter) have long, industrious, and enjoyable careers.

At the end of the presentation, I told the class that I would put the worksheet that we had created together online so that other students at other schools could use what they’d created, too. So here it is!

A Career Day worksheet (designed by our daughter’s class)

Here is the Career Day worksheet in PDF or JPG format. Like I said, don’t blame me for the wacky kid at the top right corner of the page – he was designed by a bunch of fourth graders! 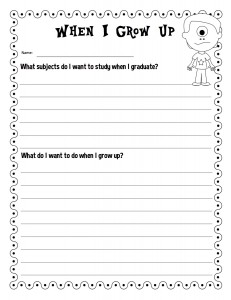