A More Than or Less Than Math Story 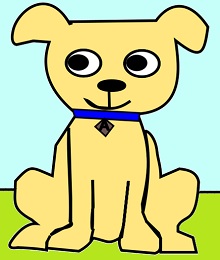 Mia the Math Magician has a special skill – she is a wizard with mathematics!

Here’s a free math story featuring Mia the Math Magician and her dog friend Clover. Download, print, and then read the story to your children or students, or have them read the story aloud to you or in front of the class if they are able to do so. When you encounter a box posing the question more or less, have your students determine the answer to the question. It will take some counting and some skills with comparing numeric values to do so.

Grammatically speaking, it is correct to say that there are more cats than dogs, and that there are fewer dogs than cats; as such, depending on how you phrase the “More or Less?” question to your child or student, you may be asking them to answer the question in a way that is grammatically incorrect (“there are less cats than dogs” is incorrect grammar). I think that this is okay at this stage in your child’s education – we’re concentrating on teaching children the math skill of how to distinguish which values are greater than or less than other values. If you’d like to take the extra step to teach them proper grammar as well, you can do so, but this is also something that they will learn in future language arts lessons.

Have fun reading and comparing numbers! 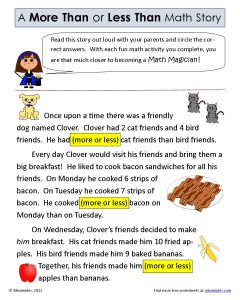